Here’s the September 7-13, 1974, TV Guide “Fall Preview” write-up about The Manhunter, a Wednesday night CBS action-drama starring Ken Howard as Dave Barrett, an ex-Marine—recently returned to the States from China—who is establishing himself during the Depression-era 1930s as a private eye-cum-bounty hunter. The show debuted on September 11, 1974, and lasted only a single season, its 22nd and final episode airing March 5, 1975. Also below is a 1974 CBS promo spot for The Manhunter. 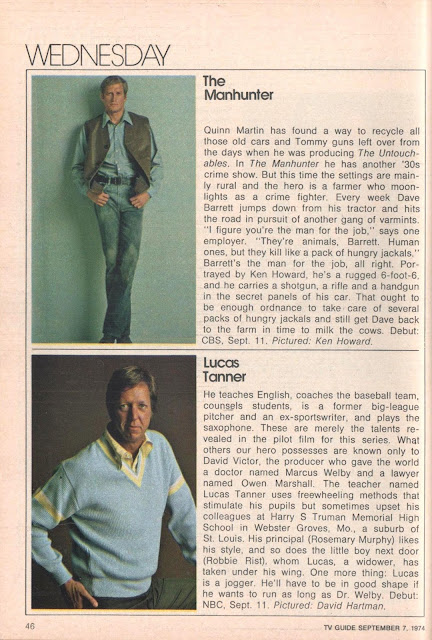 Newer Post Older Post Home
Subscribe to: Post Comments (Atom)
Why You’re Here
This page is used by journalist-author J. Kingston Pierce as a place to hold, off-site, specific images and videos that are referred to in his blogs. Click on the logos below to reach any of Pierce’s sites.

Other Blogs Worth Reading

Check out our selection of more than 390 works of mystery, crime, and thriller fiction—from both sides of the Atlantic—scheduled to reach bookstores between now and the end of August. Click here.

From time to time, Pierce’s Picture Palace features short video clips. Use of these is for historical and entertainment purposes only, and is not meant to establish ownership of such materials. Rights to those clips stay with their owners/creators.